Cancer is the 2nd leading cause of death globally, and was responsible for 8.8 Mio. deaths in 2015. More than 90% of the deaths by cancer are due to metastases. The existing treatment methods for metastases, such as chemotherapy or radiation therapy have serious side effects. They demolish the immune system, take long (6 months to several years) and are expensive. CAPTEC Medical, developed a treatment method that reduces the number of circulating tumor cells (CTCs) in patients’ blood, hence the cells with potential metastatic capability. That method is working with standard dialysis technique. CAPTEC ́s newly developed cartridge, utilizes the antigen – antibody binding concept, activates the membranes of a standard dialysis cartridge to become capable to capture specific cancer cells out of the blood when flowing through it. Parallel removal of CTCs and their metabolites will further alleviate the metastatic process and improve the patients’ quality of life and prolong life expectancy, avoiding 960.000 cancer related deaths or delay them in Europe each year.

More than 90% of cancer deaths are due to metastases1. While the entire tumorgenesis process is not fully understood, it is evident that cells spreading from the primary tumor play a key role to initiate the metastatic process. 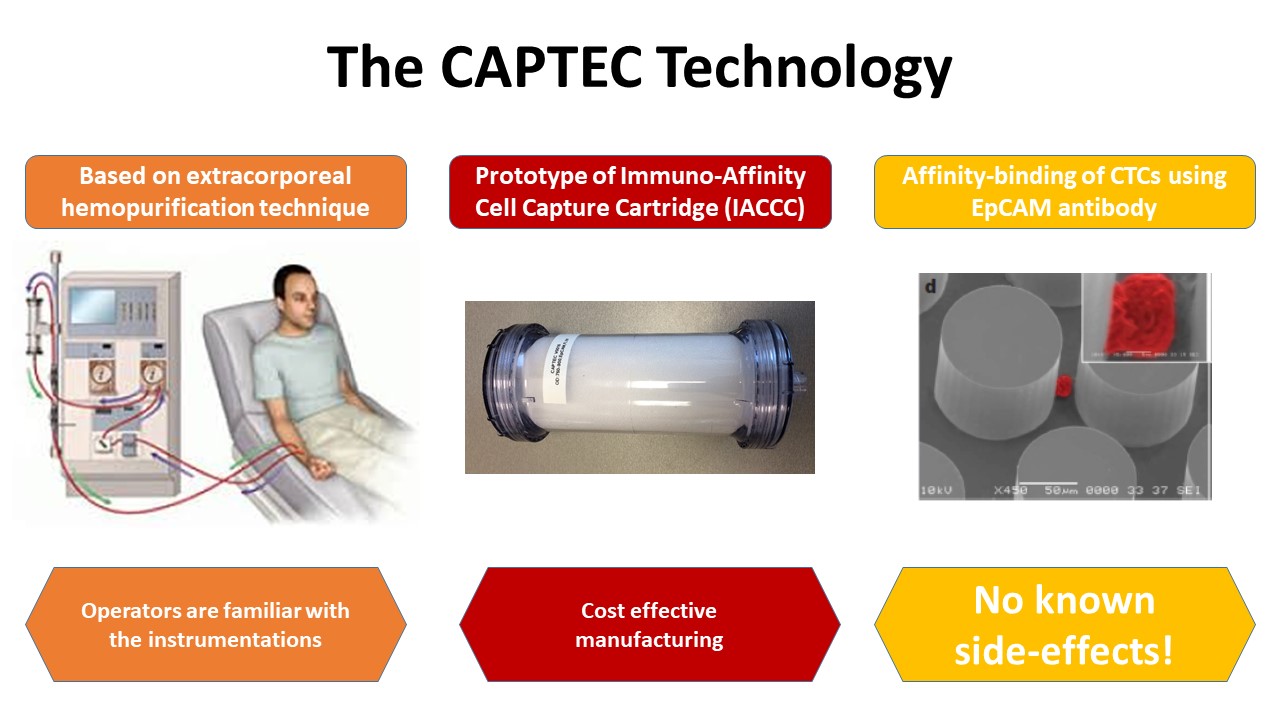 CAPTEC Medical is developing a medical device for the reduction of number of rare cells in patients’ blood. The intended use of the proposed system primarily aims to reduce the number of circulating tumor cells (CTCs) in the blood circulation. The system is based on extracorporeal hemopurification techniques that are widely used in treatments of different diseases. The removal process is based on the specific interaction of an antigen - antibody system. The targeted CTCs express a molecule on their cell surface i.e. the antigen.

The system has a number of important benefits:

CAPTEC will focus for the moment mainly on lung, colorectal, breast and prostate cancer, as the current antibody is working best with them and these four cancer types represent over 50% all cancer deaths in the world. Further segmentation is due to those cancer types that are difficult to operate due to their structure and which could cause high likelihood of spreading CTCs during the surgery process. This represents according to feedback from oncologists 20% of the total amount of patient cases. Therefore, CAPTEC estimates to achieve 2,5% to 5% of that market segment.

Furthermore conventional treatments of metastasis, are expensive (EUR 25.000.- to EUR 56.000.- per treatment for radio or chemotherapy; over EUR 100.000.- for immunotherapy or targeted precision medicine). Direct healthcare costs on cancer (DHCC) in the EU were already at EUR 86 billion in 2015 according to the IMS Institute for Healthcare Informatics.

Proof of Principle completed. US and WO patent was submitted. We proved the fact that CTCs can colonize their tumors of origin, which binding ability can be used to remove CTCs form blood. Cancer cells either from the primer tumor of the patient or from cell culture can be immobilized on the solid supporting surface of the above described cartridges and then serve as capture agents to CTC. CAPTEC requires only simple registration process, is easy to use and has low treatment costs.

The objectives of the CAPTEC project are: (1) finalize the upscaling of the prototype system (cartridge activation), (2) undergo safety and large animal studies as well as human clinical trials to prove safety and efficacy to regulatory body and market, (3) engage into a dialogue with the regulatory bodies following the Medical Device Directive (MDD), (4) pursuing the CE marking and (5) engage with important stakeholders (global cartridge producers, the EU/ US oncology community, dialysis industry, hospitals and cancer patients) to prepare for commercialization (production of IAD reagent and distribution).Validated tests confirmed capturing 78% of CTCs leaving only 0,001% in the blood.

CAPTEC´s goal is to improve survival rates in cancer patients and reduce the severity of metastatic and late stage cancers. In 2019 we aim to perform the human clinical trials and finish the regulatory process (CE marking). Our secondary aim is to conclude a partnership with a European distribution or sales partner and to exploit wider application areas.